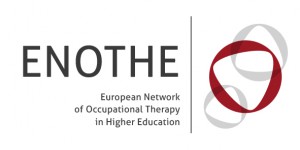 ENOTHE was a thematic network, which was originally funded by the European Commission, Socrates / Erasmus programme: Thematic Network Projects from 1997.    The main aim of the thematic network was to enhance quality and define and develop a European dimension within a given academic discipline, or other issues of common interest, through co-operation between university faculties or departments, academic and/or professional associations, employers and client-organisations. This co-operation was expected to have a lasting and widespread impact across a wide range of institutions within or between specific discipline areas.

The original ENOTHE Office was based for many years within Hogeschool van Amsterdam in the Netherlands and led by Hanneke van Bruggen. In 2010 the Office moved to be hosted within Metropolitan University College, Copenhagen, Denmark and led by Gitte Mathiasson.  In May 2014 the Office moved to York St John University, United Kingdom led by Mandy Boaz. Since 1st June 2018, the ENOTHE office became a virtual office with a Coordinator and a Finance Administrator.