Approximately 1200 people were in Vilnius in the first week of May for the 21st Congress of the European Association for Physical and Rehabilitation Medicine. The conference was well organised and medically oriented. The organisers had chosen to make separate sessions for the allied health professionals. 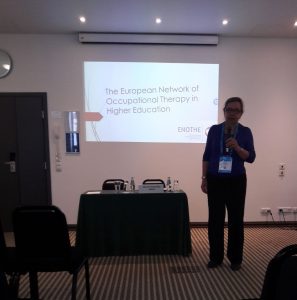 [/ezcol_1third] [ezcol_2third_end] The President of ENOTHE Dr Marie-Antoinette Minis has been invited to chair a workshop on the development of occupational therapy in Europe. The workshop consisted of four speakers who talked about the history of OT in their country: respectively the Netherlands and the three Baltic states. There were mainly OTs in the audience. Marie-Antoinette explained that in order to make occupational therapy valued and visible, the organisers should have also have planned a more integrated workshop with other disciplines.[/ezcol_2third_end]


The first presentation explained the development and strategy of ENOTHE and the development of OT-Europe. In the second presentation Marie-Antoinette emphasized the future development of occupational therapy in the Netherlands in line with new Dutch national policy. The welfare state has been transformed into a participatory society in which citizens have their responsibilities, use their social network and steering their own process.

Moreover, she has shaped her lecture on the recently published new Dutch handbook for Occupational Therapy by Le Granse, Hartingsveldt & Kinébanian, (2017) (also available in German). The handbook shows the six pillars of occupational therapy: 1. customer-oriented; 2. profession based, 3. evidence-based; 4. context-oriented; 5. technology-based and 6. population-based.[/ezcol_2third] [ezcol_1third_end] 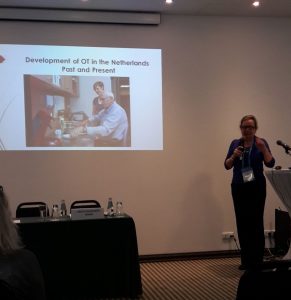 After the workshop we organised a meet and greet lunchtime with Dr Volodymyr Golyk, neurologist and his colleague dr Oksana Syvak of the Ukraine, who would like to build OT programmes in their country.